Wow… such a profound conversation, connection, dance. Manex’s life journey is, as the Sphinx Code illuminates, is one of learning to integrate his ‘Justice’ card… being in integrity with his truth… not the moral integrity of what society pushes upon us… instead the energetic reading from within of what enlivens us or depletes us, what contributes to us or takes us off path, what energy nourishes our truest self and what drains us regardless of what society says. We spoke of his relationship journey and how he literally DREAMED a relationship that hadn’t existed on the planet… and SHE arose… Our soul knows. We know. Yet can we honor respect trust and choose what we know? Can we write it down and give it to life to mirror back to us? Can we trust what we FEEL and how we’ll BE our best self in this relationship? Can we let go of what we’ll get and GIVE of our trust nature and allow this person to arise? AND can we keep putting one foot in front of the other until we meet them? Allow this conversation and perhaps a reading or wisdom quest with Manex to support you knowing who you are, honoring who you are, choosing what’s aligned with your Soul and reveling in the magic of being alive. More details here: www.manexibar.com www.wisdom-quest.com

p.s. Take our FREE Assessment. Our Intimacy Blindspot Assessment is a quick, simple yet effective assessment so you can discover how to have the sexual freedom, healthy communication, and deep connection you deserve – https://allanapratt.com/quiz

Gentlemen…End the Fear of Rejection. Enjoy your “How To Be A Noble Badass” Complementary Training at www.GetHerToSayYes.com 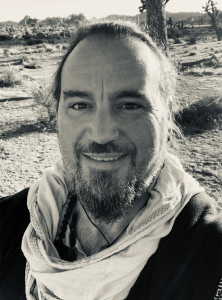 As a mystic, shaman, and composer, Manex Ibar has dedicated the last thirty years of his life to the path of liberation, and the ecstatic multi-dimensional creative power of human potential, through his vast experiences, initiations into many traditions, and perpetual seeking. Manex founded the Sphinx Code with two other individuals during a psychic exercise, and has been working on its development for the past ten years, gradually perfecting the messages and revealing the depth of knowledge of this wisdom system. The Sphinx Code is an incredibly powerful system that unveils the subconscious architecture through the use of the Tarot’s archetypes and our personalized hero’s journey. As an active speaker, author, meditation coach, and leader of powerful ceremonies, sessions, and seminars, Manex continues to spread the knowledge and wisdom of Nature, human consciousness, and the power of plants to ignite the human potential and neuro-regenerative evolutionary path. He focuses on the creative life force as the essence of our power and, via the Sphinx Code, you are able to truly liberate joy, love, and authenticity.

Manex Ibar is a natural mystic, architect of conscious experiences & shaman; a recognized leader in spirit conscious, energy dynamics, and plant medicines. Hit by lightning twice and overcoming death in the pacific ocean after drowning, as well as spending over 400 days alone in Nature, Manex has been initiated by Nature, as well as 12 different masters in multiple traditions. As a powerful consciousness business entrepreneur that lifts thousands towards the future of sustainable business practices and personal living, he is known internationally for his expertise in consciousness, subconscious archetypes and patterning, as a visionary futurist and innovative technologist. He has a powerful ability to bridge high-level concepts of spiritual consciousness with scientific methodology, making him a valuable expert, speaker, and authority on spiritual consciousness. He is sought after for expert personal, relationship, and corporate guidance and optimization, shamanic rites of passages and ceremonies, and as a master teacher that initiates others into the path of spiritual and consciousness guidance. He is a professional botanical formulist that optimizes people’s wellbeing through plants, frequency, consciousness, and wisdom, as well as a Tonmeister sound engineer composing musical journeys, meditations, and other musical experiences for the elevation and connection to Soul, Source, and Divinity.

With twenty-five years of initiation into spiritual wisdom traditions, bio-energetics, plant formulations, and occult knowledge, and a fifteen-year long professional practice in guiding individuals; Manex brings light and practical tools to solve complex situations that arise with life. As a reputed ceremonial master and workshop leader, Manex also publishes media on spiritual consciousness, subconscious energetics, shamanism, and the power of creativity as our human expansion. Called on by global business leaders, spiritual gurus, and celebrities for his vision, wisdom, practical techniques, creative solutions, and warm-heartedness, Manex fluidly integrates his enlightened connection with Nature and Source while bringing people into life changing experiences with nature. He has taught at the College of Psychic studies in London, Nomade Tulum, Esalen Institute in California, The Alchemist Kitchen in New York, ABC Home New York, Pharmacy London, Urban Retreat London, the Assemblage in New York, Green School New Zealand, and in the Basque Pyrenees; where he holds his landmark retreat Wisdom Quests (www.wisdom-quest.com). He is a top rated author on the number one rated meditation app from Mindvalley-Soulvana, and has been seen on major TV networks, podcasts, and major news and magazine editorial features globally. He is the author of a meditation program called Clairessence Meditations (http://www.clairessence-meditations.teachable.com), the Living Shamanism Tarot app and book, the creator of the powerful Sphinx Code personal activation method and the soon to be released book Nature Wisdom – Returning to Nature Spirituality.