Grace Fraga is so damn funny and even moreso, she is honest and tells it how it is. I had such a good time getting down and dirty in the thick of dealing with bad relationships with her. This interview will leave you shaking your head in agreement and with hurting cheeks from all the laughs.

This was a fricken amazing interview is all I have to say! Download it now for a great 45 minutes of truth and laughs! While you’re at it, visitallanapratt.com/grace-fragafor more info on Grace and her special offer!
You can learn more about Grace in her bio below. 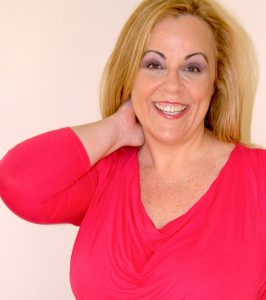 This ‘Margarita Mama’ is a whole lot of Latin laughs. Fueled by hot sauce flashes the bi-lingual award winning actress, comedienne, writer and producer has appeared on national television on NBC, A&E, CBS, Discovery Channel, Animal Planet, VH-1, Court TV, Univision, Galavision and Telemundo.
Some of her guest star roles include, “The Steve Harvey Show”, “Gene Simmons Family Jewels,” “Comedy Cage Match,” “FBI Files,” “Mystery ER,” “Killer Outbreaks,” “The First Time” and “North Mission Road.” Spanish language credits include “No Me Hallo,” “Accesso Maximo” and “Amor or Mentira.”
Night club appearances include stops in Los Angeles, New York, Miami, San Francisco, Salt Lake, Chicago, New Orleans, Reno and Las Vegas at top rated venues such as The Comedy Store, The Improv, The Laugh Factory, The Ice House, The Comedy Zone and Harrah’s. Grace has performed in colleges all over California including the University of San Diego, Cal State University, West Hills College and East Los Angeles College.
She has also toured in the “Las Comadres of Comedy, the Funniest Latinas in America” and “Women Who Kick ComedyButt” troupes and been a guest on National Lampoon and a co-host on Playboy Radio. Her internet show “Laff It Off With Grace” is still currently in syndication around the country.
Rumored to be distant relative of Eva Peron, Grace Fraga arrived in Los Angeles via New Orleans from her home town of Buenos Aires, Argentina. Since taking each city by storm, the blond bombshell has accomplished a lot. One was her win of a Big Easy Entertainment Award for Best Actress in a Comedy for her supporting role in Walt Donk’s stage play “Rio Seco.” Another was to develop a sitcom, “For the Love of Grace,” being mentored by Ellen Sandler (an Emmy Award nominee for her work on “Everybody Loves Raymond”.) Her one woman show… the Latin American Princess’ international search for her Knight in Shining Armor…“Sleeping Booty: A Modern Fairy Tale” recently had a one night only sneak peek garnering audience comments that included, “very entertaining,” “incredibly sincere, funny and intimate” and “an incredible accomplishment so much humor and heart.”
As a child growing up in South America, the ever inquisitive over achiever of a civil engineer and concert pianist earned three college degrees – a BA in Art History Education, an MA in Art History with an emphasis in Theatre and Film Analysis and a MBA in Finance, which of course led her to her career in the entertainment field because…“There’s no business like show business.”
Still close to her mother, many of Fraga’s routines are based round her mother’s advice …“When I was nineteen I asked my mother what she thought I’d be good at. She replied, you’re warm, you’re expressive and you like being in mixed company, so it’s obvious you should be a hooker.” “So now,” reflects Grace, “I get them off the streets and they pay me for hooking ‘em with my humor”… or …“When I started dating she told me that if a man hits on you on a date, throw ice on his crotch. Most women carry a purse on a date, I carry a cooler”…and “Am I Crazy? I moved 9,000 miles away from her and now she has a computer. I didn’t buy a computer… I bought 9,000 miles of umbilical cord!”
Since founding Juan-ah- Laff Productions in 2000, Grace Fraga now considers herself… “A truly assimilated American girl…with hair by Clairol, boobs by Victoria’s Secret and bootie by McDonald’s.” She also likes to describe herself as…“ Just a Spanish Valley girl, with Neiman Marcus tastes, living on a K-Mart budget!”
Recently, with Emmy Award winner Anne Beatts, she co-created, wrote, produced and starred in webisodes of “Dr. Lupe’s Love Picante” . Currently her comedy DVD “Full of Grace” is distributed by New Wave Entertainment and is available on iTunes and Amazon.com. Grace can now add author to her impressive list of accomplishments. Her book titled, “Love at First Ex”, has been getting excellent reviews on amazon.com.
The book teaches how to incorporate your Ex’s into your life. “The Ex-men factor is practical and useful,” she comments. “They are full of surprises and resources. So, don’t feel bad about getting payments from your Ex. He’s bound to appreciate you much more since you’re something he’s paying for!” She has appeared on “The Steve Harvey Show”, launching her career as a relationship coach. She just published her second book, “Love at First Ex, the Self Help Edition”, a practical guide on how to deal with the post break up aftermath.
Not one to rest on her laurels, Grace got a development deal from PBS to shoot a TV movie, “The ART of Storytelling” which she executive produced and hosted.>